Introduction: What is DAR?

If done well, an auto-rating algorithm will simply tell you what your favourite (and conversely, least favourite) music is, and the rating will be derived from and reflect actual listening behaviour. This is quite different from manual ratings (e.g. 1 - 5 stars set by the user), since there's very often a disparity between what we'd like ourselves to like, and what we actually like. For those interested in uncovering their actual musical tastes, a good auto-rating formula can be quite illuminating.

Firstly, if you don't already have them, you'll need the following:

Note: Just follow the instructions in the text file linked to above.

Very simply you paste the code into Yirkha's foo_dynfil component: 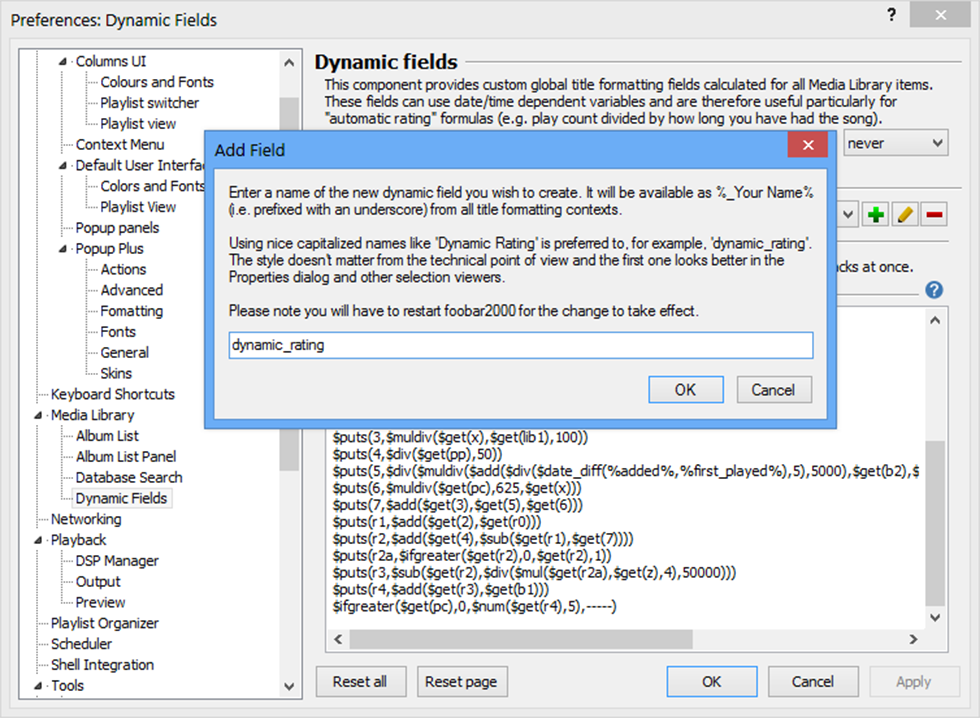 Create a custom column with %_dynamic_rating%, and under Library > (select) "Recalculate dynamic fields".

Creating an autoplaylist ranked according to the DAR algorithm

Congratulations. Your music is now being rated automatically by DADA Auto-Rating and foobar2000.

For those interested in what the DAR algorithm actually does, read on ...

The DAR algorithm solves a number of problems related to auto-rating music. In this section we'll explore how it does this, but first: "what's the problem?": 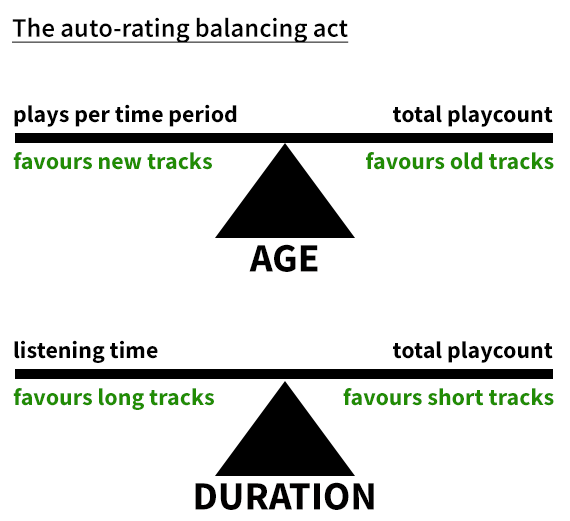 As the graph below illustrates, if duration is not taken into account at all, then a track listened to for 2,700 seconds achieves the same rating (9889) as one listened to for 27,000 seconds (10 times as long). However, if one takes absolute account of duration then the playcount of a song becomes almost secondary. DAR strikes an even balance between playcount and total listening time. 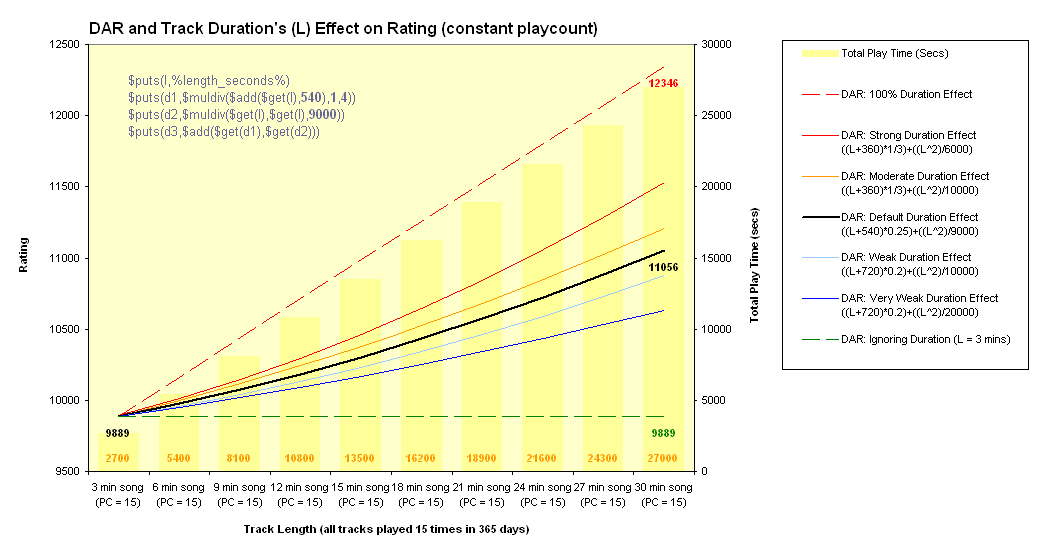 The graph below is a useful way to express the problem. From the "playcount" point of view it seems as though long tracks have a distinct advantage (e.g. to achieve a rating of 10500 after 900 days, a 4 min song has to be played approx 57 times), however, for the same rating, a 20 minute song need only be played about 25 times, so it seems unfair. Yet from the "total listening time" point of view, the 20 min song is playing for more than double the time. 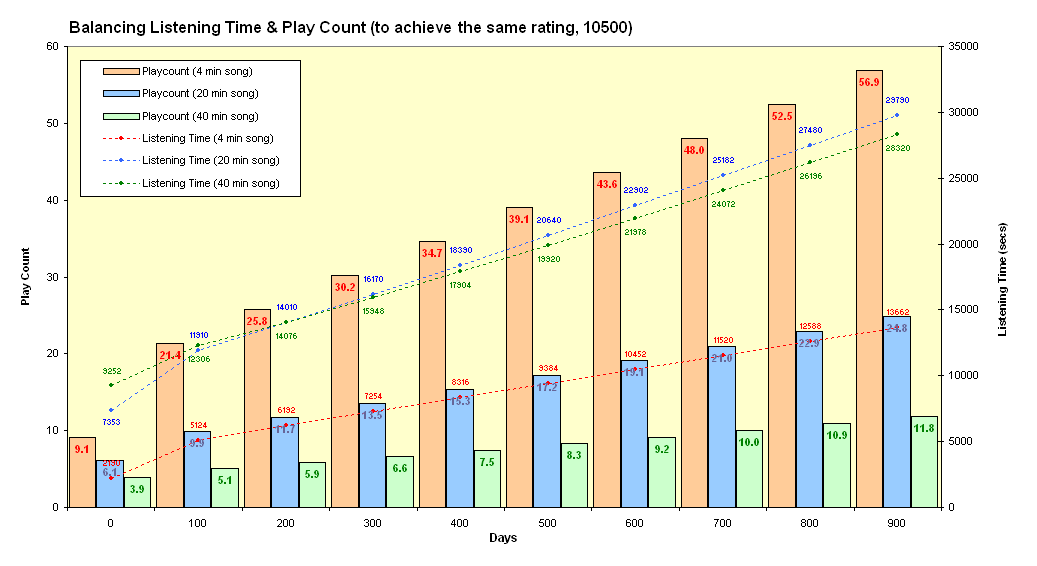 The DAR algorithm uses two independent formulas (one for old and one for new tracks) to suppress or boost the effect of time on a tracks rating. Below, the 30 min track shows the effect of boosting or suppressing both simultaneously; the 3 min track shows an example of suppressing one (i.e. old tracks) while boosting the other (i.e. new tracks) and vice versa. Adjusting these variables may be of use for people with very small (1,000 tracks) or very large collections (i.e. 50,000 tracks).

NOTE: The old track suppression variable has changed slightly since version 1.6.4 (see the graph beneath this one). 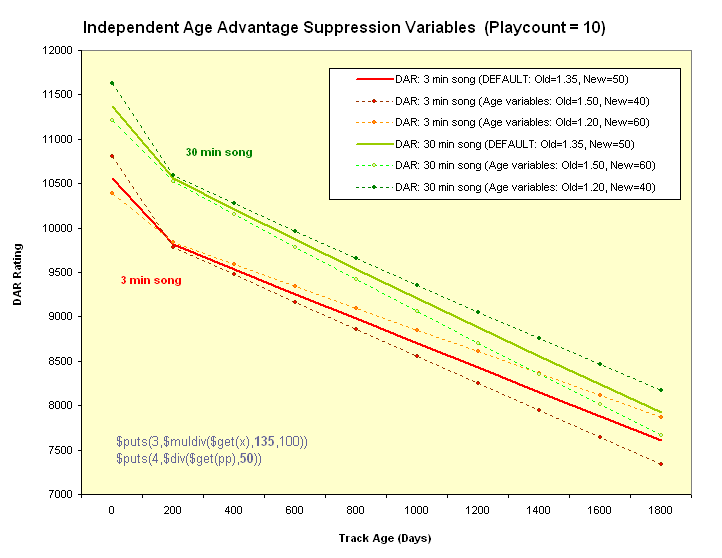 Since v1.6.4 the old track suppression multiplier is now a dynamic variable. The effect has been to reduce the "performance burden" of older tracks with each additional year in the collection. 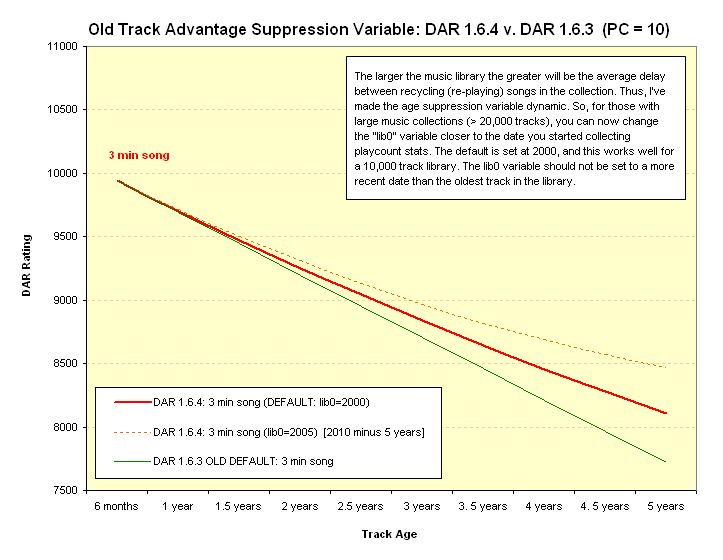 The "play per period problem" especially in the first few days can have a profoundly distorting effect. For example, you may have a track you've played 100 times in 2 years (that's a lot!), which means you play that track approx. 1 day in every 7. However, a new song played twice, straight away (has been played 2 times in 1 day), when extrapolated this suggests it will be played 14 times every 7 days, i.e. it's 14 times more popular (on a "plays per day" measure) than the track you played 100 times. Yet, it's highly unlikely you'll end up listening to that song 1400 or so times over 2 years.

For this reason, the DAR formula suppresses this effect in proportion to the age of the track. You can see this below in the playcount required to achieve a constant rating (for a rating of 10109 a brand new track has to be played almost 6 times, for the same rating after 9 weeks, the same track only has to be played 10 times). 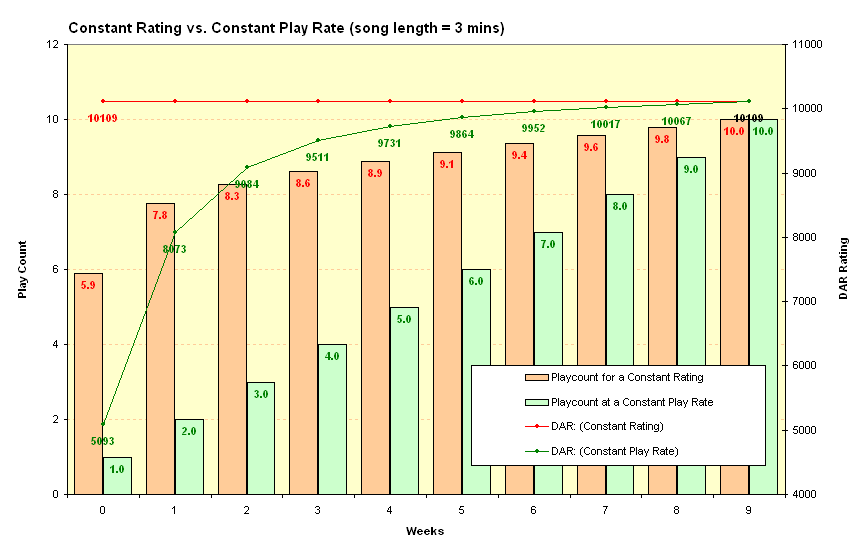 When tracks have a very low playcount (i.e. < 5) the effects of the low playcount penalty are a dominant factor in the DAR rating scheme. As the playcount increases this effect diminishes quickly (ultimately to zero). It's primary purpose is to spread the rating over a wide range. Furthermore, a track played just once or twice, whether long or short, young or old cannot be said to be a favourite, and with so few plays predicting its popularity is problematic. 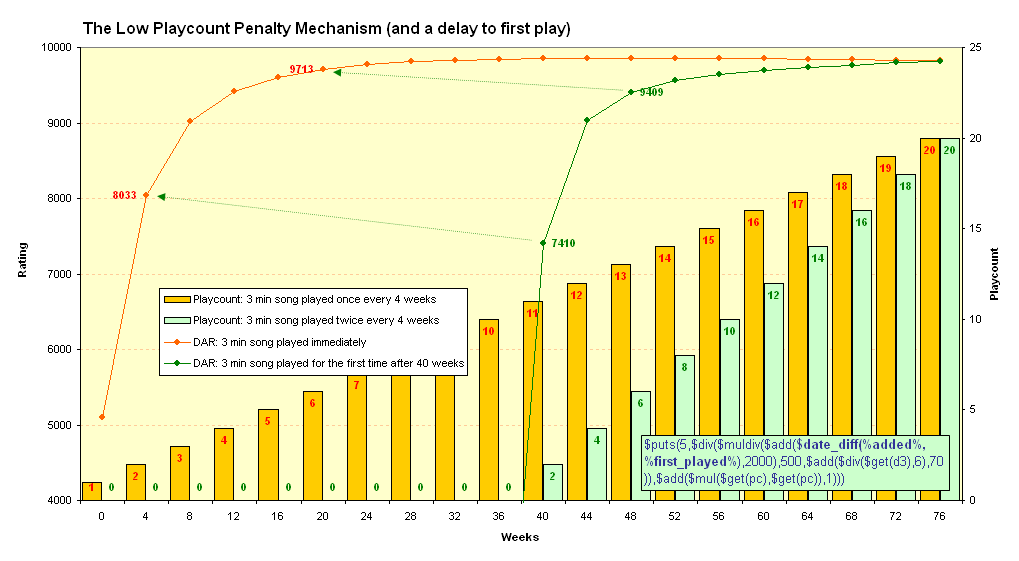 What the changes mean:

Here's the difference between the new and old penalties in isolation: 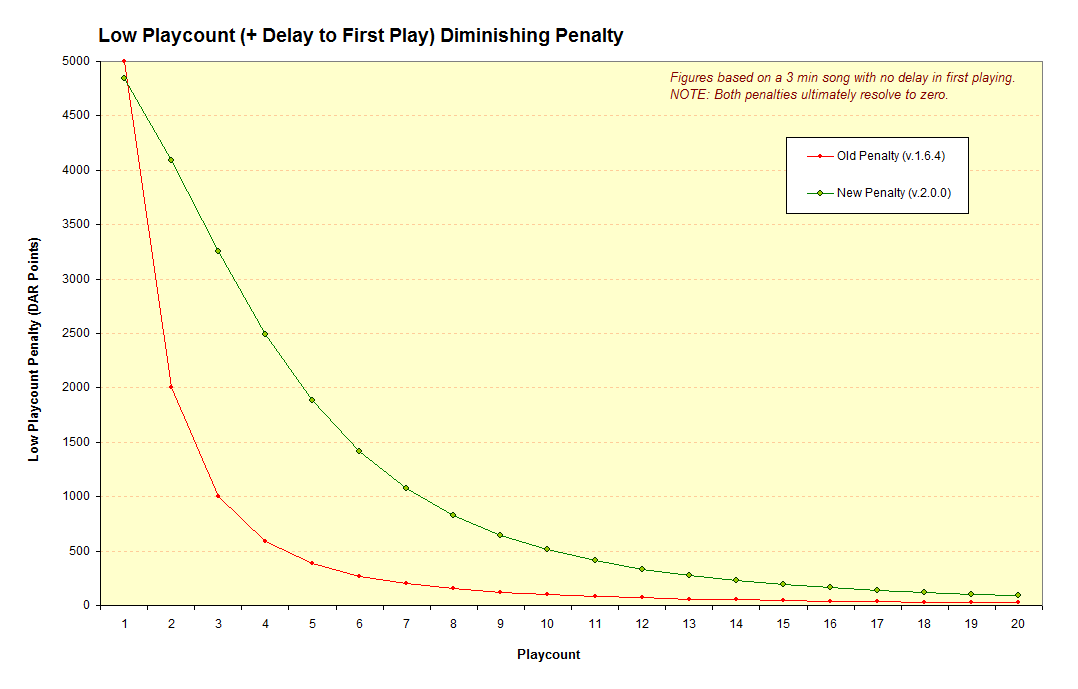 And here's the effect on the overall DAR rating:

The Floor, the Fish & the Auto-Boost

If someone has a very old library, an old track with a low playcount could get a negative rating. In versions prior to v.2.0.0 this was blocked by putting a floor on the ratings:

i.e. if the rating is less than 1 give it a rating of 1. However this kind of floor creates a distortion since a real rating of -2000 gets the same rating as one which is -5.

The DAR Rating works like salmon swimming upstream. Time is the stream's flow and each play is the energy the track requires to move against that flow. However, if one listens to some music only rarely and their library is old; that's like salmon getting really tired. The floor on the ratings is like a dam. Over time all these old tired salmon get squished up against the wall of the dam and it's impossible to know which one's a real stinker and which is just rubbish.

The new DAR version removes the dam (the ratings floor) and instead allows users to a) slow the stream's flow and b) move all the fish further upstream. Thus all these old tired salmon now have miles of river before they hit the site of the old dam. To stretch the analogy, the athletic salmon (the tracks you play a lot) will now be even further from the old dam than they were prior to the boost. The boost lifts all fish ... but not equally. 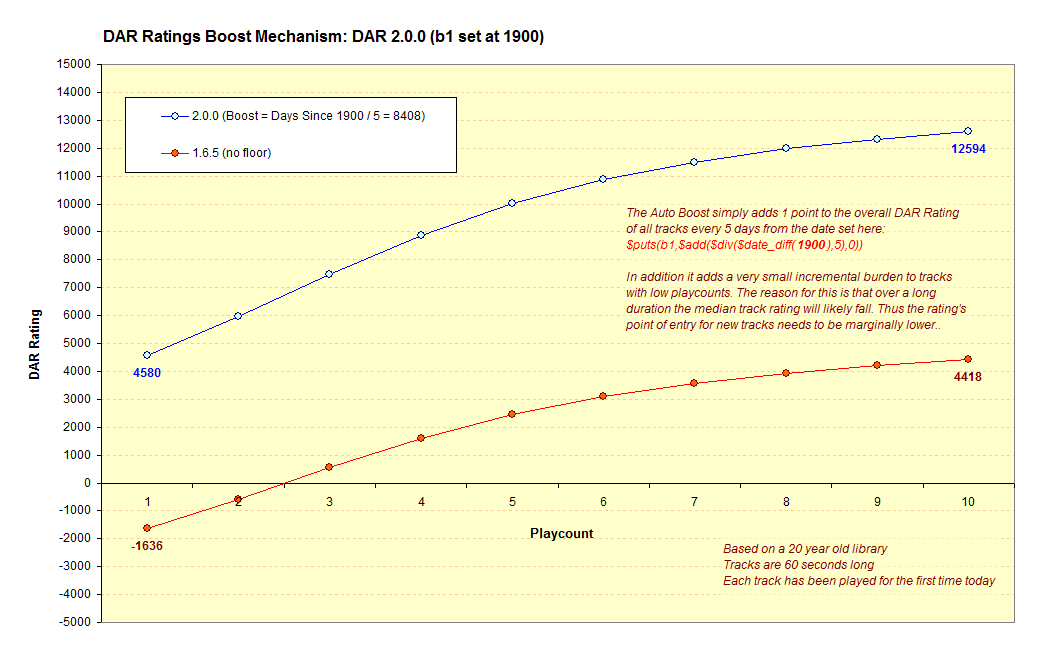 The rubbish salmon now have more river (in the example above 4580's worth) to slide further downstream. Meanwhile the athletic salmon keep swimming further upstream. Consequently, the boost results in increasing the (high-low) range of the overall ratings.

The graph below shows why it's necessary for the Auto-Boost to be connected to the Low Playcount Penalty. Since the bulk of one's ratings are slowly dropping, a new track (the pink dash) needs a lower point of entry (since that new track also benefits from any boost). 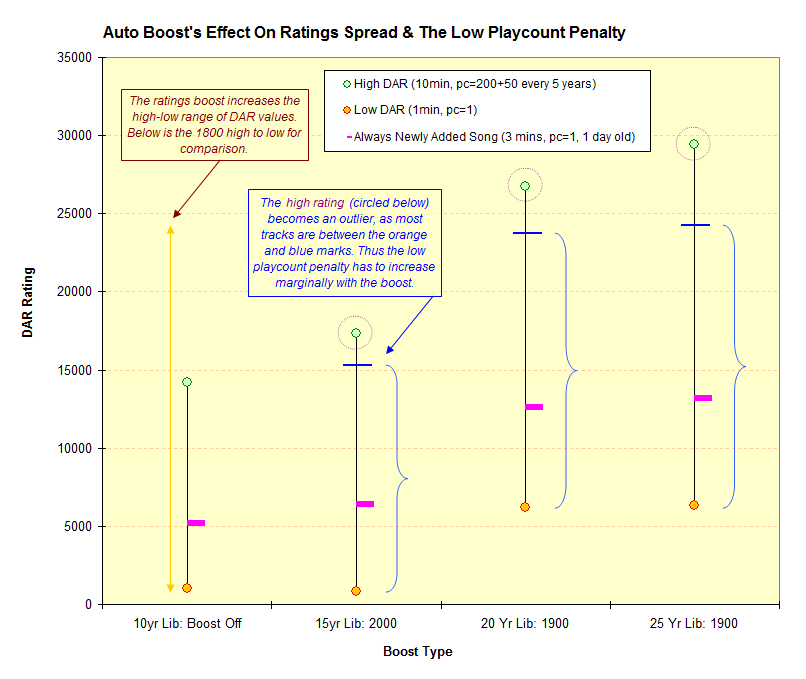 An example of how the Auto-Boost works

Playing around with the Auto-Boost

Finally, a brief look at the effect of all this on the DAR Index. The DAR Index code is used to turn the DAR values into pretty, user-friendly dots:

The graph below shows the effect of applying different auto-boost levels to the spread of indexed DAR ratings (dots). The mindar to maxdar range of 5000 (e.g. 13000 to 18000) is used in each case to show how the DAR Index values may need to be looked at after a change to the auto-boost "clock value". 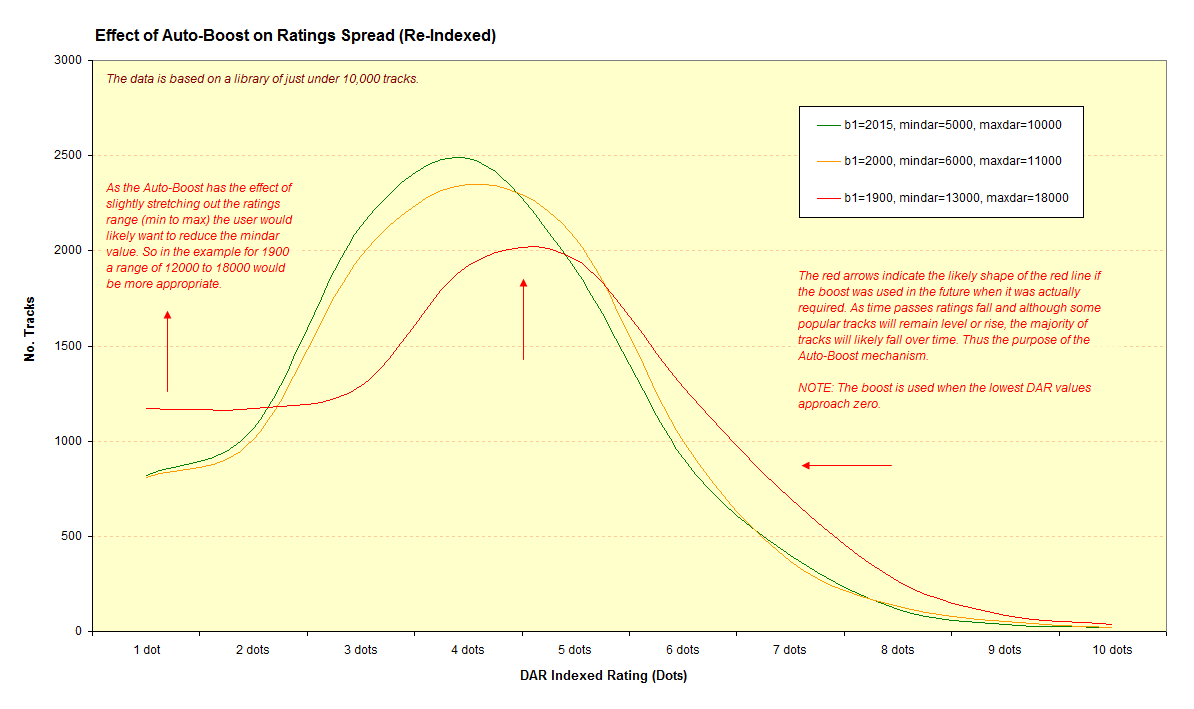 This graph should be helpful for those struggling to get the right spread of ratings dots (i.e. how to set the right mindar and maxdar values). 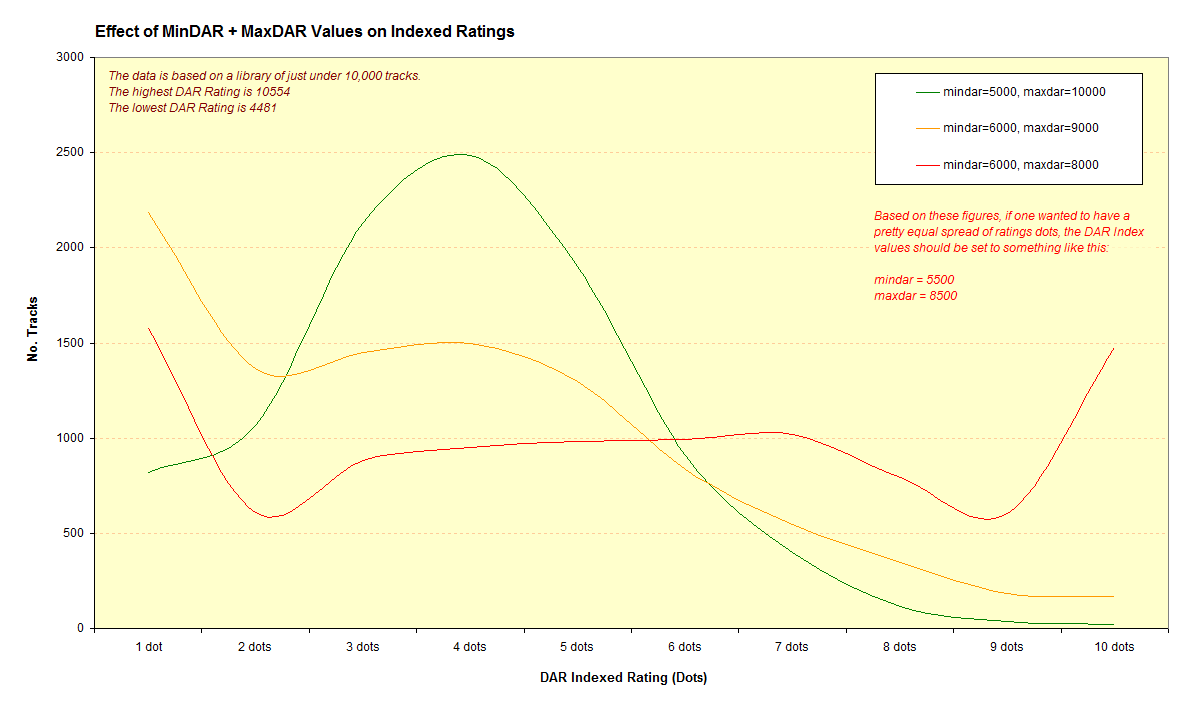 As a rule. If you want a reasonably equal spread of DAR Indexed dots (a flat line in the graph above).
I'd recommend doing something like this:

That's pretty much it for the update.

Special thanks go to Yirkha (at Hydrogen Audio) for creating his excellent and elegant component (currently in beta) foo_dynfil.

Any feedback, suggestions, questions visit the DAR thread on the foobar2000 forum at Hydrogen Audio.