Human physiology has evolved to manage flux, but human ingenuity and technological advance are creating health-related problems faster than we can adapt to resolve them. Diseases that even 30 years ago were very uncommon are not so today.

We humans are not so dissimilar to plants - we absolutely need sunlight and water and our evolution has been governed by the cyclicality of the seasons We're not built to shun the sun (whether through sunscreen, dress or indoor living, especially if we're dark skinned) nor are we built to live all year round in air-conditioned, temperature-regulated habitats. We are now realising some of the inconvenient outcomes of a "convenient lifestyle" embraced as progress and we're about to learn there's nothing particularly civilised or advanced about being sick or developmentally deficient.

This is the menu billions of years of evolutionary fine tuning has cooked up for us:

The summer and early autumn months see an abundance of fruits and starchy vegetables (carbohydrates), consuming these causes blood sugar to spike and the pancreas to release insulin. Increased insulin levels prompt the liver to convert the sugars (glucose) into triglycerides which are then stored as fat.

Winter arrives and suddenly there's not much food around, we delve into our fat reserves and what we scavenge is mainly in the form of fat and protein; we shift to a calorie-restricted, high fat, moderate protein, low carb diet (nowadays we call that a calorie-restricted Ketogenic diet). The liver makes ketones, which protect the brain from drops in blood sugar and we make glucagon which does the opposite of insulin, releasing triglycerides from fat stores to burn as fuel.

Incidentally a calorie-restricted (with intermittent fasting) ketogenic diet (including hypothermia, hint hint) is the cornerstone of Thomas Seyfried's metabolic therapy currently being tested by Slocum et al (in Turkey) in their cancer therapy trial (which is having profound successes in their non-toxic treatment of cancer).

So that's what our bio-chemistry is designed to deal with. Unfortunately, progress has been defined by our ability to insulate ourselves from natural cycles to such a degree that there are no winters anymore, not in terms of food scarcity / selection and cold exposure etc. When we look at many western governments' dietary guidelines, we see a complete disregard for the seasons. Instead what they promote is a high carb (i.e. high sugar, high insulin) diet, all your round. Then we wonder why type-2 diabetes, obesity, cancer and neuropathy are epidemics? Puzzling ...

In the following interview, Dr Ben Bikman talks about insulin, and places its dominant role in the context of our evolution:

We evolved unashamed of naked flesh, expecting plenty of sun exposure (i.e. to have optimum Vitamin D levels) and to sleep without alarm clocks; to sleep deeply (i.e. achieve paralysis in REM sleep) so our bodies could carry out essential repairs.

As Dr Gominak points out, if you want to fix a pump, you stop pumping before you try to mend it. The body's no different and our highly sophisticated sleep system, inherited from (and perfected by the time of) the dinosaurs, enables a state of "monitored" paralysis, under which complex repairs can be carried out.

It tuns out there are Vitamin D receptors in the very cells that control REM sleep. So, if you're short of Vitamin D, you'll struggle to get into REM sleep and your body won't repair itself effectively. Which helps to explain this: 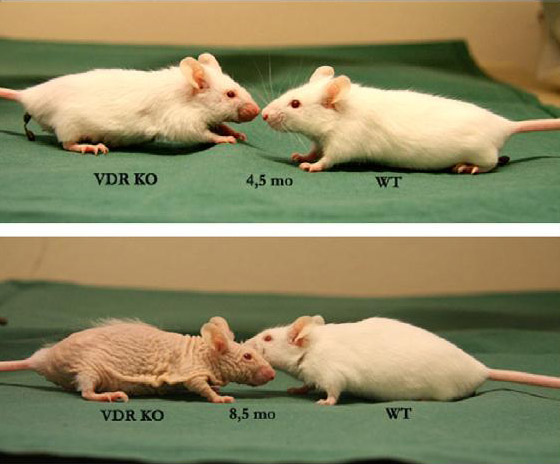 Phenotype of VDR knockout mouse (KO) compared to wildtype (WT)
littermate at the age of 4.5 (top) and 8.5 (bottom) months

The connection between Vitamin D and autism has been studied by Dr Rhonda Patrick, but here Dr Stasha Gominak suggests a parallel, potentially compounding effect. A lack of Vitamin D may be preventing a developing child from entering REM sleep. This reduces the developmental window and forces the system to triage, subordinating the less critical areas to those absolutely required for survival (social skills will be subordinated to speech and motor function for example).

What is fascinating is that the brain seems to keep a record of all the developments the system wasn't able to complete. Which means that if you give the body the required inputs and sufficient REM sleep, all of those deficient states can be remedied, even up until the age of 16.

We are self-healing machines, but for the machine to function, it has to be given the nutrients and environmental exposures that, until we got all sophisticated and advanced, weren't that hard to acquire: sun, water, a diet in harmony with the seasons, occasional fasting and plenty of high quality REM sleep.

So, does our modern lifestyle provide for this or does it starve us of it? If the latter is true, we cannot call ourselves civilised and we need to re-evaluate that crazy little thing called "progress".

Here's Dr Stasha Gominak talking about Vitamin D, REM sleep, gut bacteria and how we can defuse a ticking time bomb with a mindful step back to a quite recent past.